All of our tours can be CUSTOMIZED to suit
Personal Assistance 24/7
MONEY BACK if promises are not kept
INDOCHINA PIONEER CO., LTD https://www.indochinapioneer.com/wp-content/uploads/2017/08/icp-introduce.png From $120/person/day +84 43715 3627 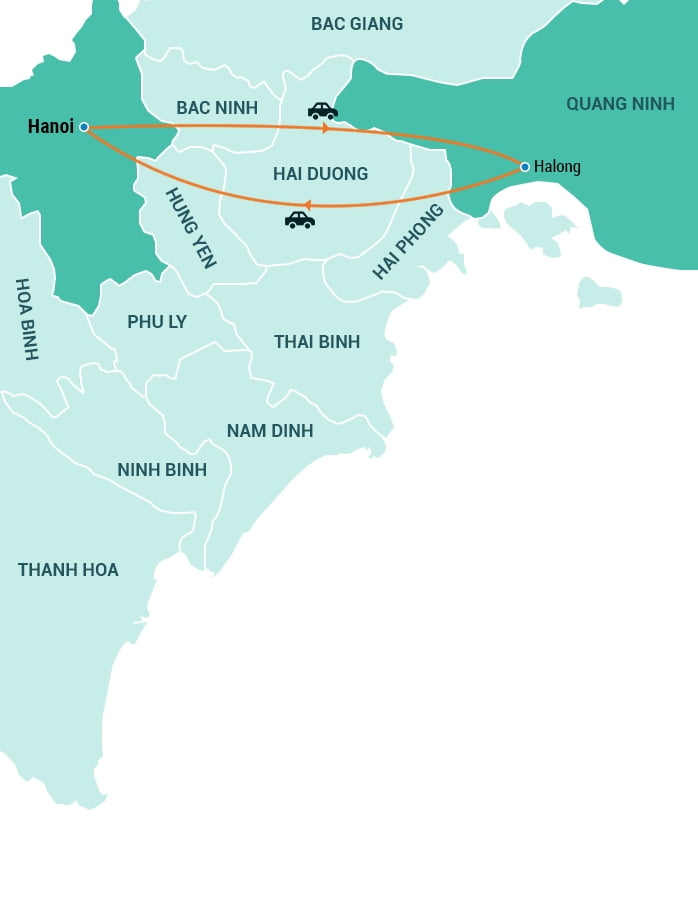 This trip is not quite right for you yet?

Upon arrival at Hanoi Airport, your private guide and driver are waiting to meet you, holding up a welcome signboard with your names on it and take you directly to your hotel in the Old Quarter.

After checking-in, you will have time to relax and adjust to the pace of Hanoi. There will be a short tour briefing this evening with your guide followed by a welcome dinner at KOTO restaurant, a social enterprise that trains and employs underprivileged youth to provide a step up in life.

Today with the help of your private guide and driver, you will get to explore the city’s major attractions. You will also sample Hanoi’s authentic local dishes away from the tourist trails, hunkering down with the locals on the street at a variety of atmospheric food stalls.

Morning
Begin with a visit to the Ho Chi Minh Complex including his Mausoleum, the Presidential Palace, the historic Stilt house, and the One Pillar Pagoda.

From Ho Chi Minh Complex, you will take a short leisurely walk through the small laneways toward Huu Tiep Lake. You will explore the grounds of a 400-year-old temple, followed by a stroll through traditional local market streets to see the B52 crash site at the lake. This US bomber was shot down during the 1972 bombing raids of Ha Noi, a poignant reminder of Vietnam’s recent history.

Take a short drive to the outskirt of Hanoi to visit the Museum of Ethnology exhibiting the 54 officially recognized ethnic groups in Vietnam. Some of them you will meet during your trip to Sapa.

Today you will have Pho for lunch, a Vietnamese Noodle shop. Some of the local people call this world-famous Noodle soup “Mac-Noodles” since it is as popular here as MacDonalds is in other parts of the world!  At the restaurant, your tour guide will explain the routine during Vietnamese meal times, and also tell you which special ingredients are needed for you.

Afternoon
After lunch, you will visit the Temple of Literature, a Confucius temple and also the first University of Vietnam. Next is Hoa Lo (so-called Hanoi Hilton), a prison used by the French colonists in Vietnam for political prisoners, and later by North Vietnam for U.S. Prisoners of War during the Vietnam War.

Embark on a fun cyclo (rickshaw) ride through the French colonial architecture of the precinct known as the French Quater, pass the French-style villas, the Vietnam History Museum, the heritage Metropole Legend Hotel and the Opera House, name to a few.

Enjoy a cup of unmissable Egg coffee at Pho Co Café with a stunning view of Hoan Kiem Lake and the surroundings.

The day comes to an end with a Walking and Food tour through Hanoi’s Old Quarter (in contrast to the French Quarter). During the food tour with the help of your personal tour guide, you will have a chance to experience one of the world’s greatest street food cities and unlock the hidden secrets of the Old Quarter and its cuisine. 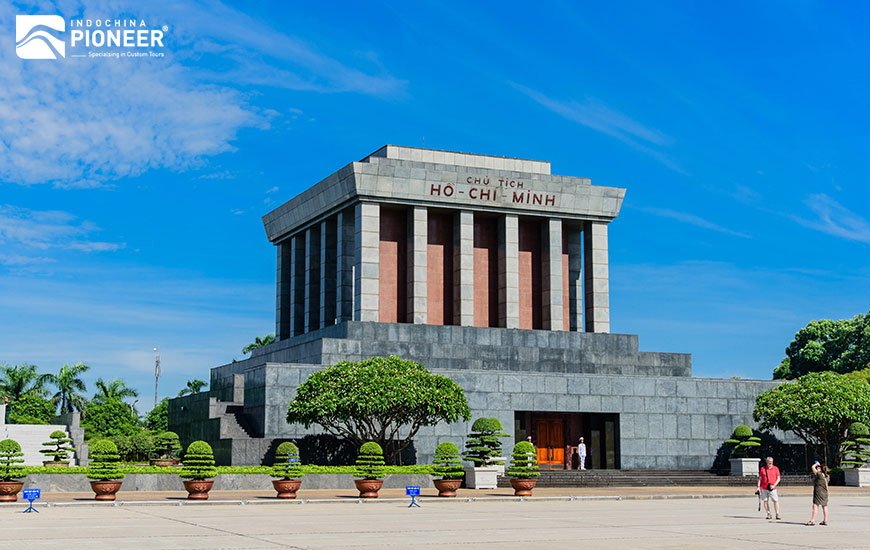 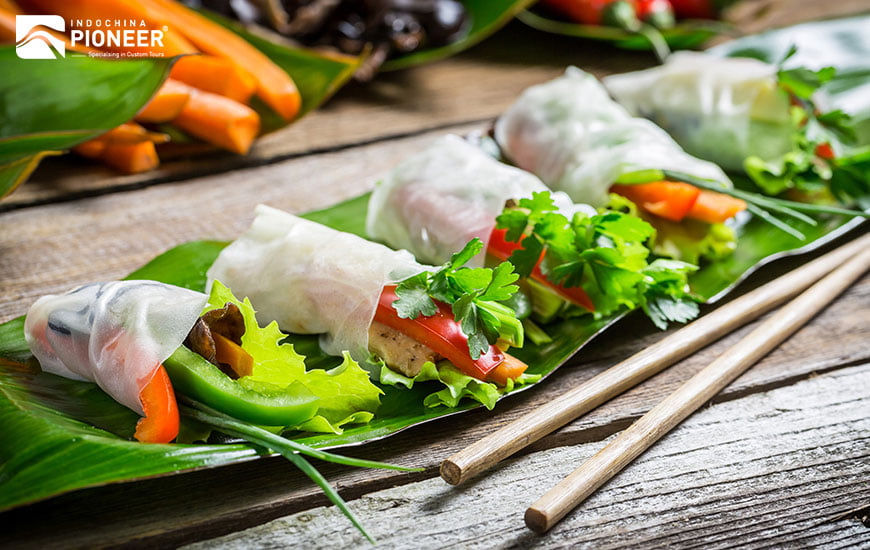 Morning
After breakfast, your private tour guide will pick you up and take you through the rich farmlands of the Red River Delta to the legendary Halong Bay where you will board a traditional-style Vietnamese Junk Boat that is your home for the evening. The limestone karsts and tropical islets rising up from the emerald waters of the bay provide an ethereal backdrop for your leisurely cruise.

Upon arrival you’ll be welcomed aboard your Stylish Junk boat, each with its own individual route, to begin your cruise around the bay’s thousands of limestone islets and caves.

Afternoon
After a delicious lunch on board, you will spend time to sunbathe on the sundeck and enjoy the peaceful tranquility of the bay.

Continue to cruise. As you weave your way through the islands, you’ll come across secluded bays, white sandy beaches, and floating villages.

There is plenty of leisure time to enjoy activities both onboard and around the fantastical scenery of the Bay. Pamper yourself at the cruise spa or swim in the emerald waters.

Toward the end of the day, you will sail to the overnight mooring area. During this time – the magical “blue hour” – Halong Bay reveals its true, magnificent beauty. You have a chance to attend the chef’s cooking demonstration or enjoy a mesmerising sunset on the top deck before a scrumptious dinner.

The rest of the evening will be at leisure. You can watch a movie or join the crew for squid fishing before retiring to your room for a restful sleep.

Note: If your time permits, we would highly recommend an additional night on board which gives you a lot more time to relax and take in the amazing landscape. You’ll get to cruise deeper into the Bay where it’s more beautiful and less crowded.

Overnight on board in Halong Bay
Meals: (B/L/D) 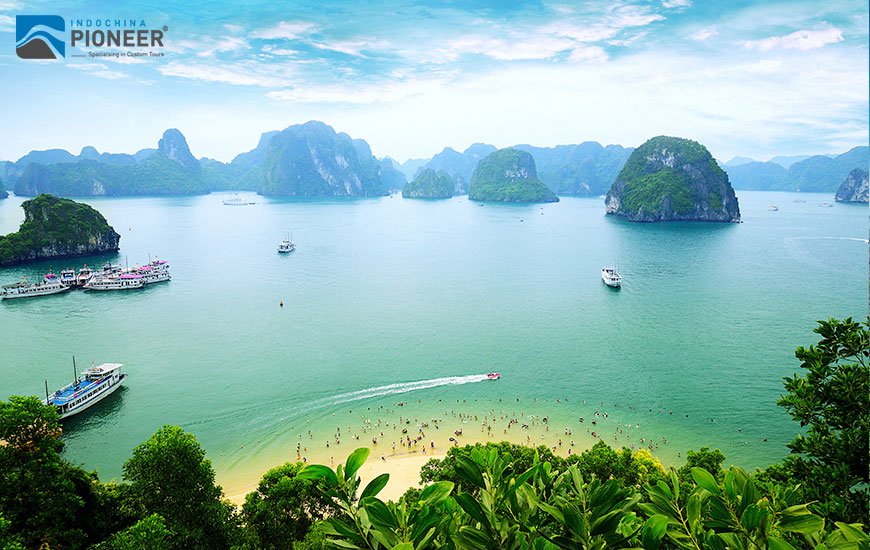 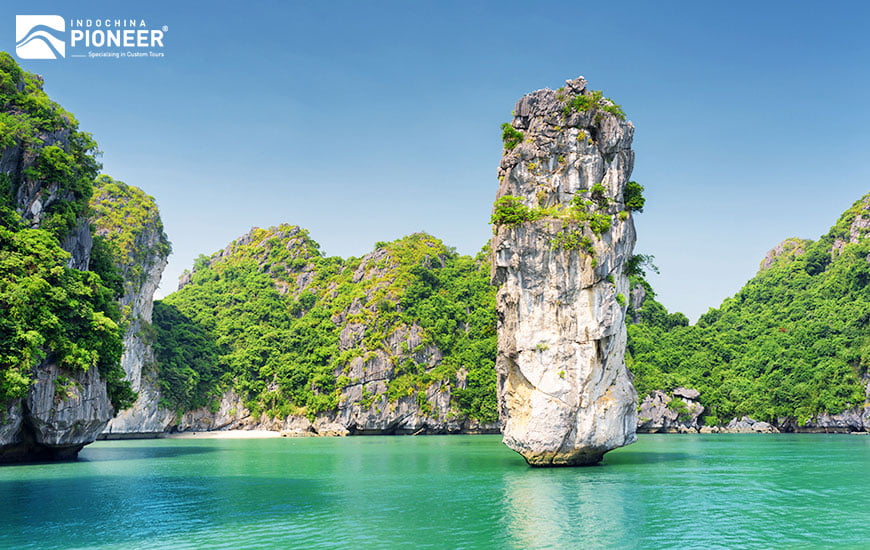 Morning
The graceful practice of Tai Chi eases you into your day as is the local custom. Join a ‘Local Specialist’ on the deck of the Junk boat for a morning class in exquisite natural surrounds. You’ll have time for an early morning swim at one of Halong Bay’s quiet beaches and, if you’re feeling energetic, hop on a kayak and paddle through the Dark and Bright Caves admiring the glittering stone walls.

Back to the Junk boat. Check out of the cabin and then enjoy a full brunch buffet as you cruise back to port. Disembark around midday for your return drive to Hanoi.

Afternoon
Arrive at your hotel in Hanoi where you spend the remainder of the afternoon and evening at your leisure. You may head to Bong Sen theater to attend the unique traditional Water Puppet Show dating back for a thousand years. 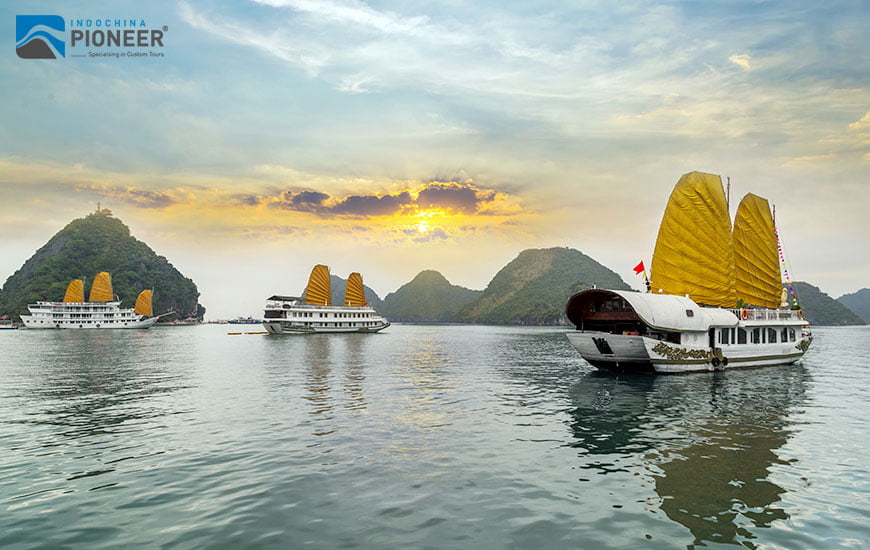 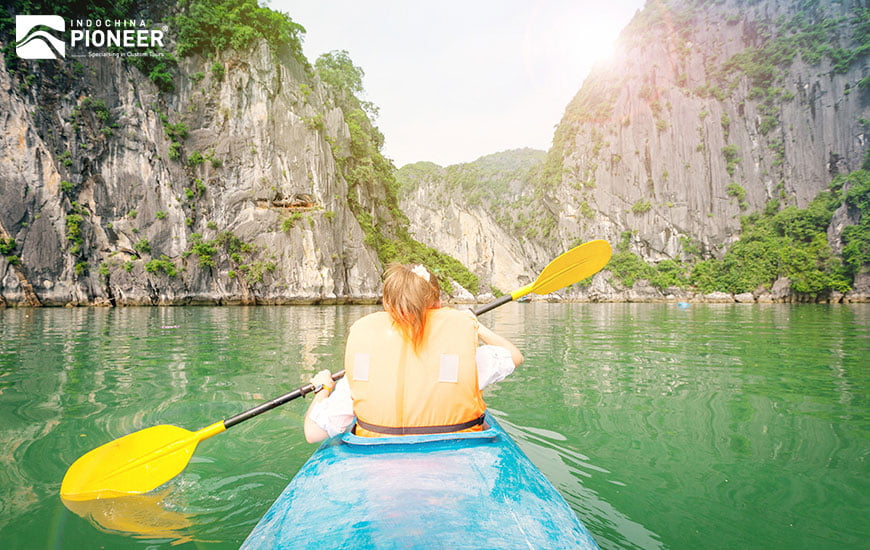 Your private transfer greets you at the hotel after breakfast and escorts you to Hanoi International Airport where you board your flight home or travel on to more adventures, we will help you with the planning.

Book with confidence. We’re an ASTA member who provide a range of safety guarantee.

99% of clients would recommend us

My husband and I recently returned from a most amazing 16 day tour of Vietnam and Thailand. Thank you Kata Tran for compiling an itinerary which was the perfect balance of sightseeing, activity, and beach relaxation. There are too many highlights to detail. Know, however, each transfer between destinations was seamless and accommodations were fabulous at each stop. Most remarkable…it never ceased to amaze us that each driver/guide could be so punctual (considering the traffic in some regions), never being even a minute late! The whole Indochina team who contributed to our trip was incredible!

I highly recommend this tour company.

This tour is built upon our firsthand knowledge & experience, offering you the best choices available. The price of this trip varies depending on the number of people in your party, dates of departure, and the availability of ground services. Please click on REQUEST A FREE QUOTE (above) and supply the required information, enabling us to send you your personalized quote within 24 hours!

Note: Amendments CAN be made to this tour to suit your requirements. 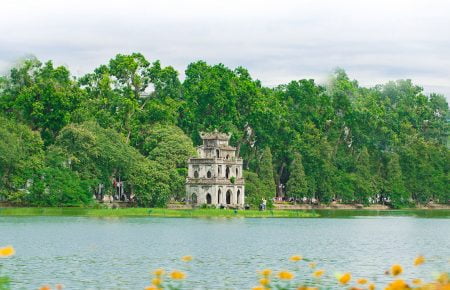 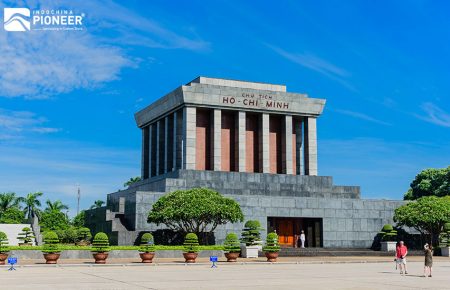 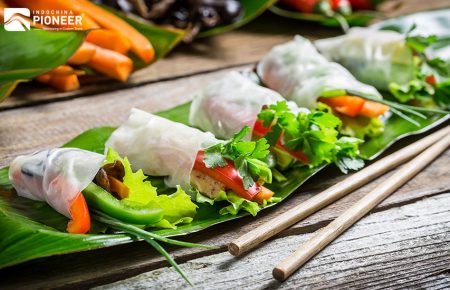 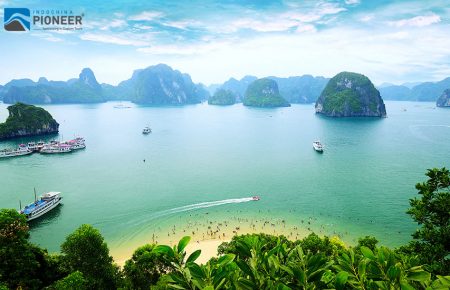 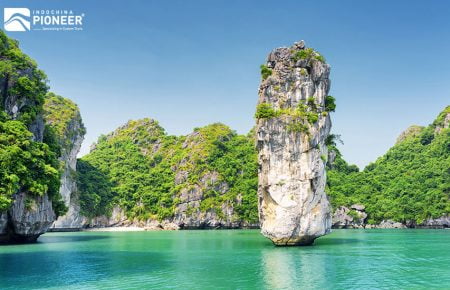 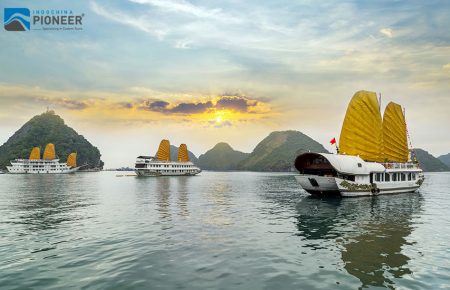 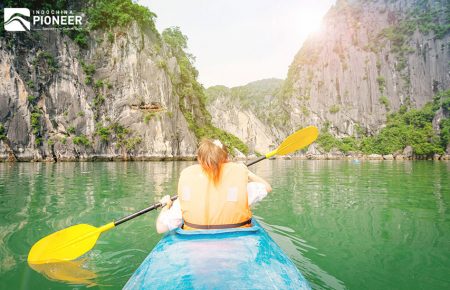 Reviews on Our Service 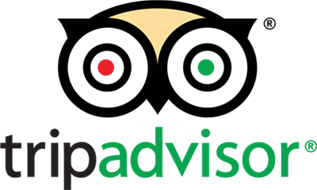 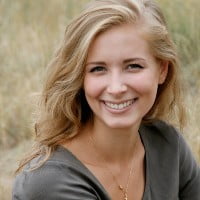 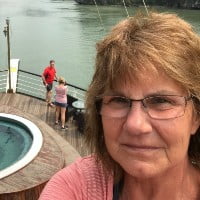 Lam did an amazing job putting together an itinerary based on phone/text conversations. We told him the where and what and he did the rest. The accommodations were beyond expectation, the guides were unbelievably friendly, and the places we were taken were spectacular. Having guides and drivers is worth every penny. So much time and money would have been wasted had we tried to accomplish this ourselves.

We got to experience so much more because of our guides local knowledge. Lastly, how great it was not to worry about how we were getting to the next adventure. Had we not used Indochina Pioneer I truly believe I wouldn’t have as many astonishing memories. 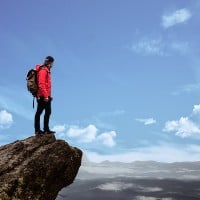 If you are looking for a private tour of SE Asia, look no further than Indochina Pioneer. I recently returned from a 30-day private tour of Vietnam, Cambodia and Thailand all arranged by Indochina Pioneer and could not have been happier with everything they arranged for me. They are top-notch from working directly with you on planning your trip, arranging visas, having individuals at the airports to meet and walk you through everything when entering the countries, having amazing tour guides and drivers as well as organizing everything for you on the ground and being there to help you all along the way if you have any questions or problems. My tour was amazing with not only the normal tourist sights, but many off the beaten track sights and with your own guides, you learn so much more from these individuals who actually live in the places you will visit. I can’t recommend this tour agency enough. If you are looking to travel to any of the locations Indochina Pioneer has tours, you must book through them, you will not be disappointed. 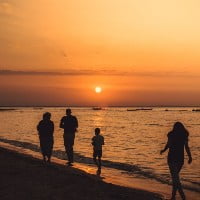 "Excellent from the very beginning"

We had 21 days on a private tour and every detail was perfectly arranged. Perhaps, the Spanish speaking skills of guides can ve improved, but overall they were very helpful and committed with their job. I want to highlight the performance of Juan (Hanoi), Miguel (Hoi An), Chao (Ho Chi Minh City) and La (Luang Prabang, Laos).
Hotels were as we asked and the timing for the visits was very good.
I recommend this travel agency! 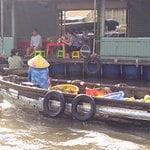 Tour Code: IPV28
Hanoi → Farming Land → Halong Bay → Overnight Train → Sapa → Sa Seng Village → Ta Phin & Ma Tra → HanoiExplore the best of northern Vietnam with us in 8 days! Discover the farming land and be a farmer for a day in a rural village of Hanoi...
View Details Enquire Now
Deal: US$747
Typically: US$956
You save: US$209

Vietnam: Mountains to the Sea

Tour Code: IPV33
Hanoi → Ban Gioc Waterfall → Ba Be Lake → Hoang Su Phi → Bac Ha → Sapa → Lan Ha BayVietnam is renowned for its intriguing landscapes, and this ‘Mountains to the Sea’ tour will take you to the best sights in our country...
View Details Enquire Now
Deal: US$1,423
Typically: US$1,827
You save: US$404