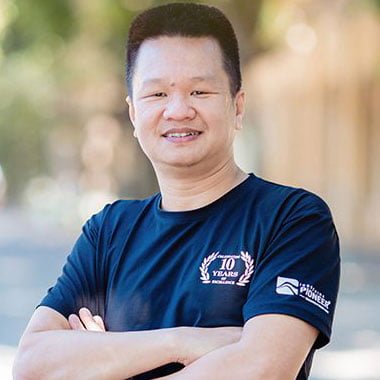 Quyen’s  interesting background in Foreign Language Studies gives him a sophisticated grasp on even the most complicated aspects of English language and cultural differences. At the early stage of his career, Quyen started as an University lecturer, to satisfy the passion of sharing his knowledge to people. However, Quyen quickly realized the real “love of his life” coming from applying what he knows to real life, by combining them with his big hobby: travel.

No sooner leaving his teaching job, Quyen spent more than 10 years in tourism industry, practicing, learning, experiencing with many types of occupation (tour guide, tour leader, tour manager, operation manager, customer service manager etc.), cooperating to a number of famous local and international brand names. In 2009, together with another travel expert, also his best buddy, Lam, Quyen established Indochina Pioneer Co., Ltd to fulfill the desire of bringing the Indochina homeland and Asia as close to the rest of world as possible, by providing signature service packages created from insightful understandings in tourism and passion.

Besides being a travel expert, Quyen also loves music and sports, and is a fun person to be around. He is also a devoted father and husband.

What My Clients Say 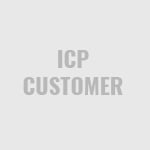 Dear Quyen,
I also cannot believe we are heading home tomorrow. I have had a trip of a lifetime and will never forget my time in Thailand, Cambodia, and Vietnam. Each of our experiences down to the last one on Mekong Delta have been more than I expected.
The guides have all been wonderful and so knowledgeable.
I really enjoyed our fun night out with you and thank you for the beautiful scarf. I will need it with the cold weather at home.
I will certainly recommend your company to anyone travelling to south east Asia.
I will also give your best to Cam and Don.
Kind regards
Arlene Cornwall
PS It has been nice relaxing on the beach the last couple of days.

Hi Quyen,
We are all home safe and sound. Always happy to be off the plane after the long flight. We all had a wonderful time traveling in Thailand, Cambodia and Vietnam, thanks to your help. Our airlines connections, hotels, guides and adventures were all perfect. Given the time we had to spend there is nothing we would have changed. I have not seen Cam and Don yet but hope to see them in the next few days. I am sure they will love the beautiful scarves you gave them. Now that I am home where it is cold I am wearing my new scarf to keep warm. It is a nice memory of you and of our fun travels. Thank you so much for everything. If I know of anyone else traveling to SE Asia I will definitely refer them to to Indochina Pioneer.
Hope all continues to be well with you and yours
Mary-K 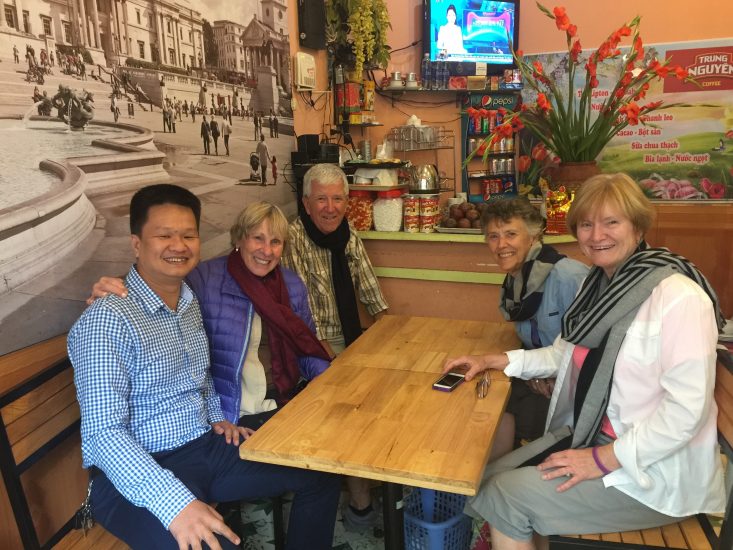 "Thank you from Deb Gray Australia"

Thank you very much for all your effort’s in attending to our needs whilst we were travelling in Cambodia and Vietnam. And and tie had a fabulous experience and enjoyed the trip tremendously.

You provided us with some outstanding guides and drivers and for their expert services we would like to extend them our most humble gratitude and appreciation for their efforts, which I am sure in some ways was far beyond their duty.

Would you be able to provide me with all the names and contact details of our Drivers and Guides for each area that we visited we are getting a little gift together from Australia and would like them to receive these gifts of thanks.

Again, I extend to you our most humble thanks for a trip of a lifetime. 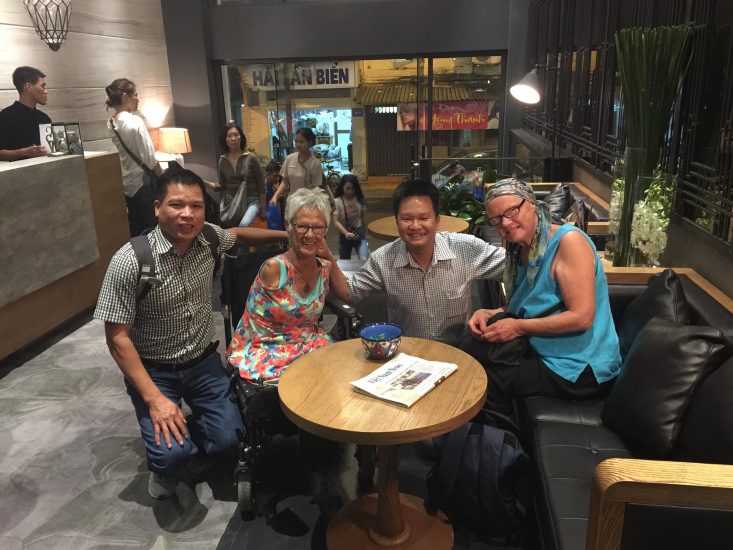 I’m sorry its taken so long to respond. Pat and I both got really sick on our way home, apparently we picked up a parasite on the trip. Then I fell at work and I’m now off my feet… The trip was great! Thank you so much for everything you did. We have bragged about you and your company to everyone thats asked about our trip. A few of our friends even submitted inquiries on your webpage to set up their own trips. We really cannot thank you enough for everything you did.

Thailand- we enjoyed both of our tour guides and our drivers. In fact, Maya was probably my favorite guide on the entire trip. That girl deserves a raise and a promotion!! She was so wonderful. We are glad that we did Bangkok, but probably wouldn’t go back. However, we loved Chiang Mai and Chiang Rai. We would visit there many times over. We talked about going back when Im not pregnant, there were many things there that we would have loved to do but couldn’t because of the baby.

Laos- We enjoyed visiting, and it’s definitely a check off the box as far as countries go, but I would only go back as a mission trip. Laos was very humbling and made me even more happy to be from where I am from. As Americans, we take many things for granted that people in Laos would love to have. We weren’t a fan of the guide here. He did well as far as telling us things, but he was a bit pushy and wouldn’t take no for an answer. There were a few times that we said we didn’t want to do something because it was hard for me, or Liz/Pat were injured, but we did them anyways. The hotel was also troublesome, however I think it is mostly because we are American and used to certain things that aren’t possible in Laos. But, the power was out most of the time, there was no warm water (not even partially warm), and the house next to the hotel had a bunch of roosters that decided to wake us up at 2am everyday. But, again this isn’t something you could have overcome and in no way do we blame anyone for it. I think Laos would be a great mission trip with our church!!

Vietnam- Our guide in Hanoi was simply awesome. We enjoyed him a lot!! Pat still talks about him. Our favorite part was the food tour. We also enjoyed Halong Bay, A LOT!! But, the drivers to and from there were horrifying. And the mess with getting us to the airport after was so frustrating. We even had to argue with them as they were driving us back to Hanoi that we weren’t supposed to be going back to the hotel. They eventually dropped us off at some gas station and a different driver came. We ended up in a private car because they were convinced we were wrong. Hoi An was beautiful. We enjoyed our time here a lot!!

Cambodia- By far our favorite place of the trip!! I wish we would have spent more time here. Everything to see was so interesting. We will definitely do Cambodia again!! Our guide was amazing, both of our drivers were so fun, so polite, and the best drivers we had on the entire trip. We loved Cambodia. Our only complaint was the driver trying to take us to the airport. He was there for an hour. We asked him 2 different times if he was sure it wasn’t us he was taking. The bell hop from the airport even loaded our stuff in his car. He took it out and said no. It wasn’t until the manager came and talk to him that he admitted he was supposed to pick us up. We were very late getting to the airport. I can say it is the ONLY time I have ever been happy our flight was majorly delayed.

Thank you again for everything! We had an amazing trip. It was life changing and our memories will be cherished forever. If you guys set up in the Philippines, let me know! Happy New Year and all the best to you and your family!! 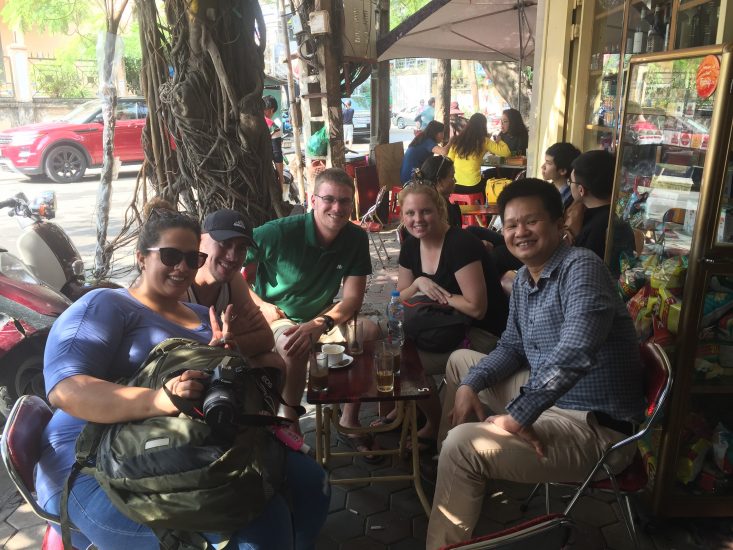 We are in great spirits, still coming off the cloud of our amazing experience with Indochina Pioneer. Mac and I have been a bit busy the past few days, but we will get back to you with a very thorough response to your inquiry. Quite honestly, though, most of what we have to say is very positive and will identify the things we really cherished; we do have a few small suggestions about the hotels.

Glad you had a wonderful trip to Phu Quoc – we’d love to visit it someday. 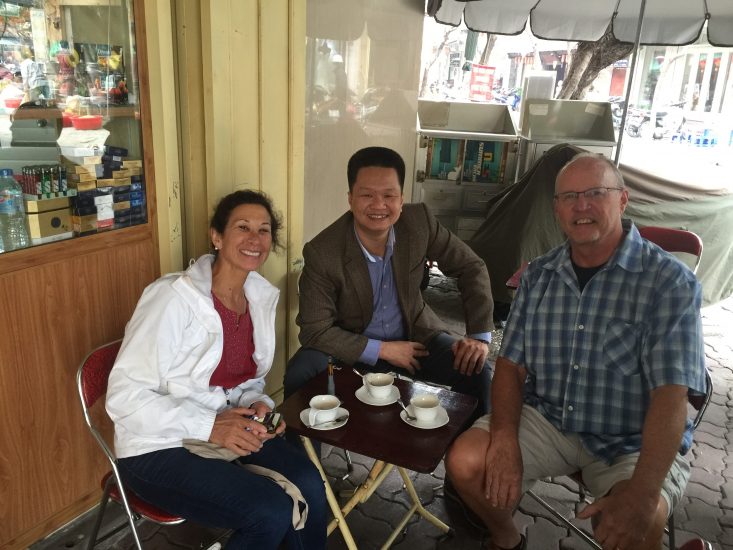