The sleeping beauty of Southeast Asia, the Republic of Laos has been isolated for decades and therefore tourism is still very much in its infancy here. Time seems to slow down in Laos, as even in the capital city, Vientiane, the pace of life is refreshingly unhurried. The government is instigating a green approach to its development, with the intention of keeping Laos’ pristine ecological system as natural as possible. This makes Laos a dream destination for nature and wildlife lovers, who are seeking the true meaning of getting away from it all.

Besides being a land where no one is in a hurry, Laos is also a land of Buddhist traditions where you will find saffron-robed teens peek curiously out from wats (temples). And while earning the title of being the world’s most heavily bombed country hardly seems like a ringing endorsement, a visit to Luang Prabang’s World Heritage temples soothes the soul. Explore Vientiane, the world’s smallest capital, as it moves at the same serene pace as the Mekong river floating by its shores.

Here at Indochina Pioneer, our experienced Laos holiday specialists have traveled extensively throughout Laos, researching the best hotels, sites, and activities. Let us help you create an itinerary that is bound to delight everyone in your party.

Most popular sites of Laos

• Luang Prabang – a UNESCO World Heritage site in 1995, best known for its high concentration of Buddhist temples and serene location on the banks of Mekong
• The Mekong River – runs from the north-west to the most southern tip of Laos, forming a natural border with Thailand; cruising on the river provides a great opportunity to see some of the more remote areas of the country which are often inaccessible by road
• Plain of Jars – see the dotted landscape of Laos with hundreds of mysterious and centuries-old stone jars 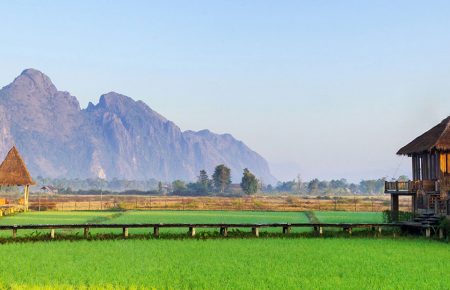